This amazing new adventure launches on June 19th at our Downtown location!
​ Charter your vessel now to be among the first to land at Shipwreck Cove.
CHARTER A VESSEL
x
If you're a Founder's Club member,
be sure to log into your account first
to remove the private event fee.
Founder's Club Log-in
- Log into your account
- Click "New booking"
- Select "Shipwreck Cove" from the "Escape Room" dropdown menu
- Select June 19th or later on the calendar
If you're not a Founder's Club member,
click below to book your experience:
BOOK SHIPWRECK COVE
READ THE LEGEND OF SHIPWRECK COVE
x 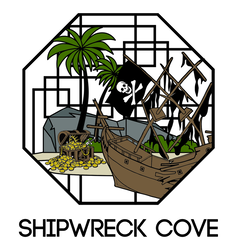 At the third gathering of the nine Pirate Lords, chaos erupted among the tribes. It had long been rumored that a treasure so big, no one man could possess it had been found, and the pirate tribes each felt they had a claim to it. The Pirate Lords called for a vote to select a Pirate King, and when each Lord voted for himself, war broke out.

One Pirate never gave up his search, and eventually, found himself on the right path to the treasure. Tobias Moon, the captain of the Drunken Cutlass, uncovered clues to the treasure, and sailed his crew towards Shipwreck Cove. In a moment of extreme hubris, Tobias sailed his crew straight into the heart of the cove, where the ship ran aground and was lost among the rocks and the sea.

​Your crew has discovered the wreckage of his ship, and the path to the treasure is within your reach. Can you traverse the perils that await you and come away with the treasure, or will you become another one of the victims of Shipwreck Cove?
Memphis Escape Rooms